Just checking out the features of Google Wave, its in its early days. But plenty of things to try out. 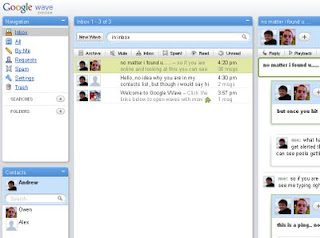 Some neat display options for the folders/contacts list etc. However, at the moment there appears to be a huge burden on the user as to the 'correct way' to use a wave so that its not confusing for the other users. You can ping people (to add them into a wave at a certain point), reply in private, reply at any stage of a wave, edit someone else text in a wave! I though they wanted to get anyway from confusing monster email's.. Even with the playback, playing back a 60 reply message is not so quick..

Just this moment had a live wave with Owen which was a bit like using an IM, although you can go back and edit the other persons replied. Not sure about that. Also no sign of the 'coloured by user' text feature that I saw in the feature length preview video. However, it will take some time to see how it all works and will have to give the 'known bugs' & 'not yet implemented features' lists a quick read

Thanks to Owen for getting me the invite! Check out the his web comic.
Posted by Andy at 15:21

Email ThisBlogThis!Share to TwitterShare to FacebookShare to Pinterest
Tags: web