SSRS - Aggregate of an Aggregate

So here is how to subtotal a column that is itself a sum function. SSRS 2005 wont allow you to aggregate an aggregate function. For example, the total of a column showing a Running Total, useful in daily stock balance calculations.
Add the following code to the report  Report > Properties 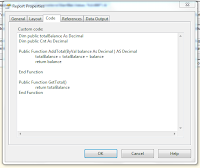 
This code adds two variables: totalbalance and cnt as decimal numbers. And two functions AddTotal and GetTotal.
AddTotal allows items in rows to be added up, use as follows in a value cell, where you had;

in the total cell, where it you were unable to simply use


Simply add more variables and public functions if you need to sum the sum of more that one field.
Inspired by this post on averages of averages link
Posted by Andy at 02:09 No comments: